What is civic space?

This short commentary by the Fund for Global Human Rights outlines what we mean by 'civic space', how it works, and why it is so important. 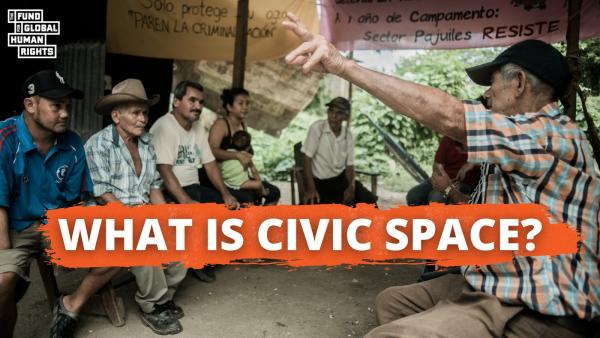 "IN BRIEF, WHAT IS CIVIC SPACE?
In one sense, civic space is literally just that: a space, physical or digital, where people (not governments or businesses) come together to exercise their human rights and core freedoms. Civic work helps shape our politics, economies, and social realities.

To be more precise, civic space can be defined as a set of legal conditions experienced as a lived environment that enables people—whether alone or with others, physically or online—to be active in their communities, to speak out, to organize, to gather together in protest or to help one another, and to participate in the governance of their community, area, or country.

These conditions stem from international and regional treaties as well as domestic constitutions and laws, which enshrine people’s fundamental freedoms: to express themselves, to associate with others, to assemble peacefully, and to access information. They are intrinsic human rights that generations of activists have mobilized collectively to guarantee we can enjoy.

WHO CAN PARTICIPATE IN CIVIC SPACE?
We all can—when conditions allow!

People use their civic space to bring about change, individually or together. Organizing outside the realm of family, government, or business—what we usually call “civil society”—can include members and representatives of informal community or social groups, religious organizations, cultural institutions, professional nonprofits, or universities. Governments have a legal duty to ensure that all people (or “civil society”) are able to enjoy civic space by exercising their core freedoms and other human rights.

In practice, however, not everyone is able to participate fully in civic space, for a variety of reasons. Civic space is not equally free and open the world over, and some groups in society are discriminated against or prevented from exercising their rights.

HOW DOES CIVIC SPACE DIFFER AROUND THE WORLD?
Conceptually and in international law, civic space should be the same anywhere. In reality, though, it’s not. States, businesses, and some private groups impose restrictions or attack certain civil society groups and movements.

Advocates work hard to keep civic space open for us all to enjoy. Some organizations monitor changes in civic space around the world, tracking indicators that measure the extent to which laws, policies, and practices enshrine and enable the exercise of core freedoms (association, assembly, and expression) and other rights. One example is the CIVICUS Monitor.

Many watchdogs, such as CIVICUS, also rate countries, so you can compare countries or regions to one another as well as over time. According to CIVICUS, less than 4 percent of the world’s population lives in a county with “open” civic space, and almost 70 percent live in countries where civic space is either “repressed” or “closed.”

WHAT ARE THE BIGGEST THREATS TO CIVIC SPACE?
Common threats to civic space include:

Digital and physical attacks on human rights defenders and their organizations, particularly against LGBTQ, women, and minority activists
Activists being harassed, intimidated, surveilled, and—most gravely—jailed, tortured, or killed
Protests being violently disrupted and protestors detained
Internet shutdowns and online censorship
Laws banning foreign funding (which many human rights activists rely on) and imposing unjustified restrictions on the operations of civil society groups
Administrative regimes that tie organizations up in bureaucratic red tape and render them vulnerable to criminalization
All of these scare tactics—but especially the imprisonment, torture, and killing of human rights defenders—add up to create a chilling effect on activism, which dissuades ordinary people from exercising their basic freedoms—thereby closing civic space. Despite these challenges, though, many brave human rights defenders persist to keep civic space open.

WHAT DOES CLOSING SPACE LOOK LIKE IN PRACTICE?
Closing civic space is marked by restrictive laws, surveillance, intimidation, stigmatization, and attacks. At its most extreme, this includes jailing, torturing, and killing activists. Under these conditions, activists can’t gather, organize, take action, or share information and opinions without facing threats or repercussions.

In Uganda, for example, a human rights group challenging government abuses was falsely accused of funding terrorism and had its bank accounts frozen. In the Philippines, an organization documenting human rights abuses has been persistently accused of being a communist front—and multiple members have been assassinated.

In India—the world’s largest democracy—legal restrictions on foreign funding have severely undermined a labor rights association trying to provide critical relief to informal workers through the COVID-19 pandemic. And in Mexico, the government has used surveillance technology intended to fight organized crime to spy on journalists and human rights groups who are exposing state corruption.

Organizations like Front Line Defenders and Global Witness have documented the imprisonment, torture, and murder of human rights defenders and environmental activists.

WHO IS DRIVING THE CLOSURE OF CIVIC SPACE?
In 2019, our partners at the Funders Initiative for Civil Society (FICS) led a global review into the future of civic space and found that one issue stood out: security.

Abusing security legislation to criminalize protest and silence dissent
Misusing information and communication technologies to surveil and censor activists
Promoting a “security-first” narrative to sow division, spread fear, and build public support for concentrated state power
The COVID-19 pandemic has accelerated each of these trends: populist-leaning democratic or authoritarian leaders have used the pandemic to curb criticism and repress peaceful activists. Thriving technology and defense firms have capitalized on the crisis to promote techno-solutions that furnish governments with unprecedented power to engage in surveillance and restrict access to information. And all states have reframed the health crisis as a national security emergency to justify their exceptional measures.

Long story short: when civic space is limited, the justification is always security.

HOW CAN WE DEFEND THE INTEGRITY OF CIVIC SPACE?
First and foremost, winning hearts and minds is key. The more people understand what is at risk, the more public and policymaker support we can count on.

Closing civic space isn’t just about activism. It’s part of the wider trend of rising authoritarianism and the erosion of democracy. U.S.-based NGO Freedom House reported that 2020 was the fourteenth consecutive year that saw democratic freedom decline in more countries than improve.

That means that defending civic space is more than just a legal struggle to ensure the laws and policies enacted by states adhere to international standards on freedom of speech, association, and assembly. Beyond the legal and political arena, we must appeal to our shared humanity and the intrinsic values that unite us.

If we want a future in which anyone can exercise their rights, then we must help people see civic space as a resource we all need—the oxygen of participation and activism."