Countering an Authoritarian Overhaul of the Internet

Read this recent report by Freedom on the Net on how authoritarians are on a campaign to divide the open internet into a patchwork of repressive enclaves. 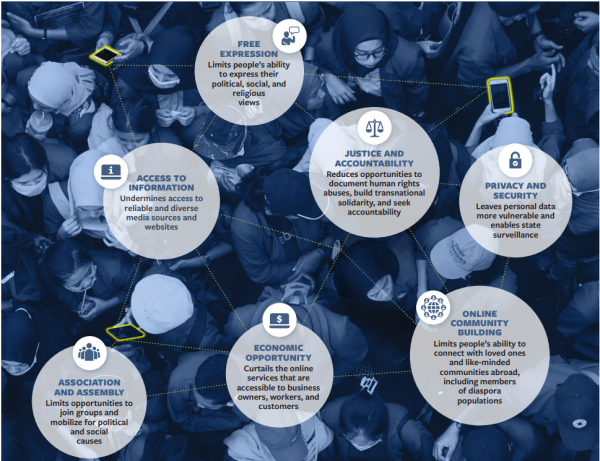 Global internet freedom declined for the 12th consecutive year. The sharpest downgrades were documented in Russia, Myanmar, Sudan, and Libya. Following the Russian military’s illegal and unprovoked invasion of Ukraine, the Kremlin dramatically intensified its ongoing efforts to suppress domestic dissent and accelerated the closure or exile of the country’s remaining independent media outlets. In at least 53 countries, users faced legal repercussions for expressing themselves online, often leading to draconian prison terms.

Governments are breaking apart the global internet to create more controllable online spaces. A record number of national governments blocked websites with nonviolent political, social, or religious content, undermining the rights to free expression and access to information. A majority of these blocks targeted sources located outside of the country. New national laws posed an additional threat to the free flow of information by centralizing technical infrastructure and applying flawed regulations to social media platforms and user data.

China was the world’s worst environment for internet freedom for the eighth consecutive year. Censorship intensified during the 2022 Beijing Olympics and after tennis star Peng Shuai accused a high-ranking Chinese Communist Party (CCP) official of sexual assault. The government continued to tighten its control over the country’s booming technology sector, including through new rules that require platforms to use their algorithmic systems to promote CCP ideology.

Internet freedom in the United States improved marginally for the first time in six years. There were fewer reported cases of targeted surveillance and online harassment during protests compared with the previous year, and the country now ranks ninth globally, tied with Australia and France. The United States still lacks a comprehensive federal privacy law, and policymakers made little progress on the passage of other legislation related to internet freedom. Ahead of the November 2022 midterm elections, the online environment was riddled with political disinformation, conspiracy theories, and online harassment aimed at election workers and officials.

Human rights hang in the balance amid a competition to control the web. Authoritarian states are vying to propagate their model of digital control around the world. In response, a coalition of democratic governments has increased the promotion of online human rights at multilateral forums, outlining a positive vision for the internet. However, their progress remains hampered by problematic internet freedom practices in their own countries.